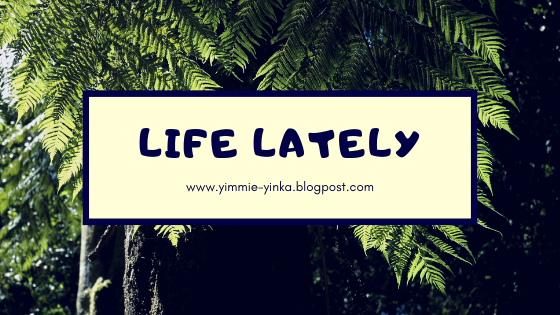 yinkadeniyi April 10, 2019 22 Comments
Yay!!! We made it to another blog post on life lately. Who else is as excited as I am? I legit thought that it will take forever getting here, seeing that I have been looking forward to another “Life Lately” post after I wrote the very first one and I know that I have not been putting up steady blog post as I would love even though I have been curating content on the side… I promise to do better even as I battle with laziness and lack of motivation.
I’m not sure there are a lot of updates to give at this time, I mean my life lately has been the mixture of both exciting and boring. Anyway, I promise to cover as much as I can but you guys have to promise to leave me a comment telling me at least one thing that has been going on in your life lately.
Okay, let’s dive in 😁😁

So, if you have been following the life lately post from the beginning, I talked about leaving my job, attending a digital marketing training and starting another job on my first life lately post. However, what I did not mention was that the job I started in September of 2018 was an internship, an internship that I was hoping will be renewed so that I could move on to become a full staff but unfortunately, that didn’t happen.
I concluded my internship in December and then had to begin the journey of applying for jobs… if there’s one thing I hate is not having something to do, something that can legit be paying the bills. So, I guess it’s okay to say that at this point I was a little bit frustrated.
Anyway, by January I had started going for a couple of interviews and sometimes it would look promising only to get a rejection letter in my mail… not to bore you with the details, the job offers started coming in February and by March I had close 5 offers. Is God not faithful?
Blog
One of my articles got featured on a friend’s blog in Italy and it was the Bomb!!! The feedback I got from it has been overwhelming and heartwarming. I had fun writing the piece as usual but it was something different than I have ever written before. I remember feeling stuck for weeks, mehn! the writer’s block was not of this world but it came out on top.
Do check it out here, if you’re yet to read it.
Relationship
I just sincerely think it will be nice to tick this box but as it turned out this box is not ready to be ticked yet. I just wish people will let me be if you can’t introduce me to a rich billionaire or a prince then the least you can do is let Yinka’s love life be. The other day, my parent sat me down one early morning to ask if I was seeing someone and know how they could direct their prayers. OMG! I almost burst out laughing, there have been times when I was still a teenager and even when I was in university that my dad will seize my phone, monitor who I was speaking with and now the man is asking me for a husband and subtly sliding the fact that he would love to see my kids. I’m not even sure if I should call that an intervention because all I wanted to do after that early morning conversation was to catch up on my favourite series.
The recent birthday thing didn’t make it any easier as almost all the prayer was about meeting Mr Husband. Well, Mr Husband can you please come out now, the umpteenth prayer has been rendered for you to appear.
What I have learned Recently
In the section under work, I mentioned getting multiple job offers but one thing I would like to say that this perhaps might not have happened if it weren’t for the people who shared these opportunities with me so that I could apply, put in a good word for me and then also the God factor.
This experience has taught me so much about the people currency and how to maintain and grow it, I have also learnt how to put myself out there by speaking up (this I’m still learning to do) but my point is I was able to leverage on the people in my network, I was able to let them know that I was in need of a job and they, in turn, were able to share opportunities with me.
PS: – I became a godmother this month… the best news ever
A few photos from the last couple of months

See, it wasn’t even as voluminous as the last one…like I said, nothing much has been going on with me but if you made it this far, then at this point you might as well give me a few life updates too!!
I will be waiting in the comment section below 😉😉