An Ode to Lagos 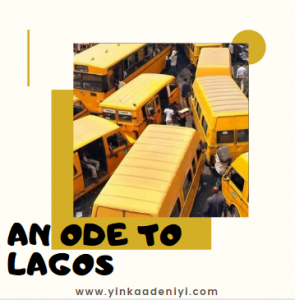 As I highlighted from the bus at Jakande estate Gate Isolo, Lagos, I clutched my bag to my chest after checking for the umpteenth time to make sure my bag was still zipped the same way I left it few seconds ago.

The city of lagos is many things and the one thing it doesn’t give room for is your lack of preparedness, you don’t prepare for lagos, lagos prepares you and then you get along with it.

One thing lagos quickly turns you into is a vigilante, the need to constantly watch over yourself and your body parts. Yes, body parts.

As soon as I made sure my zip was in his rightful place I marched on like a soldier it will take an army of thieves to snatch this bag from me or unzip it to take my stuff.

I bet you wondering what could be of importance to make me clutch my bag for dear life, nothing much just my journal, phone and wallet.

The thing is everything is valuable in Lagos even the things you never give credence too once it is taken from you the value just skyrocket.

Lagos is the white lab rat experiment, best believe that. if it has not been practised and successful in Lagos, it can’t be replicated anywhere else in Nigeria.

Lagos is many things but patience. In Lagos time waits for no one.

Lagos is the grey anatomy of the popular TV series only that this time patients with diseases and disabilities are not in the hospitals, they’re on the streets of Lagos with Christian songs blasting from a radio begging for alms.

Lagos is beauty wrapped in chaos, It is sorrow wrapped in laughter, all you need do is look at the exchange of words between an angry conductor and its passenger and then if you look closely enough between the rough exchange of words going on, there’s a passenger who is amused by it all and cannot help but laugh.

Lagos is amusement free of charge.

Alot of skills comes in handy in Lagos one of which is knowing how to switch from posh English to Agbero style.

The average person in Lagos is looking for how to move 10 steps ahead of you, forget the fact this things happen only on the streets of Lagos cos it also happens in the corporate rooms.

Lagos is not for the faint-hearted, the out pour of rain signals money increase for the danfo and okada riders and it’s either you pay now or pay later, there’s no escaping.

Lagos is paying premium for services that will not be rendered to you in premium, ask those living in the prime area of the city, how many of the services they pay for is given to them or the office serviced apartments where lights goes off at random and the elevator is put off for close to 2 hours or more every day and yet we still pay.

Lagos is trusting your instincts to help someone, give a lift or help with directions even though you know that you can be swindled or kidnapped.

Lagos is giving room to be robbed by your passenger when you’re a uber or taxify driver because you don’t know whose request will come in and no one has a profile that states I rob Uber and Taxify drivers and I would like to request for a ride.

It is the exotic night life for those who can afford it and for the wannabees. Bottom life is everyone has their own agenda from the person who just want to have a good to the person who wants to get laid.

It is the tailor who tells you your clothes will be ready next week but you know it won’t so you tell the tailor you need the clothes yesterday so that they can double their hustle and so that you can avoid stories that touch the heart.

Lagos is waking up by 3am or 4am, leave the house before 5am so that you can get to an office that resumes for 9am all in the bid to avoid the traffic and then get home as late as 10pm or 12am.

It is the storey building in obalende that looks as if it will collapse any minute yet people are seen walking in and out of the building.

It is the sweet aroma of ofada stew and rice as you get to Ikeja Under bridge, the women with their coolers and pot of stew in front of them call to you as you pass by… Ofada rice here.

Lagos is the synergy of the Ewa Goyin woman and the Agege Bread seller, they know that they need each other to make the business faster so they pair up and to the woman who can’t find an Agege Bread woman to pair up with, she packages her wares by adding plantain or yam to it.

Lagos is entering a bike with someone you don’t know from anywhere but because the fares are expensive, you will do anything to reduce the cost, so you climb the bike with a stranger whose sweat will probably rubb off on you.

Lagos is the pervert okada rider man who purposely jerks the bike forward so that your breast can hit him when you try to get your balance.

Lagos is the cat calling, arm grabbing and abusive words being hurled at you when you visit Yaba or Aswani market.

Lagos is the make believe of the things we call carnivals on our streets, only this time there are lots knockouts being thrown around and you could leave there injured or maimed.

It is the secretary who has turned herself to the gatekeeper whom if you don’t pay special obescience to you won’t see the needed persons.

It is the entitlement feeling a sales person feels to your tip.

It is the unexplained traffic that everyone has finally termed as witches having meetings on the road because there is never an explanation of the cause.

Lagos the city of opportunities to those who know how to harness it and a city of chaos to those who know where it is kept. It is everything, the expectations and the dreams we have for you are limitless and while we hope that you get better, we believe that you will serve us well.

Oh my Lagos, the city that strangles you most times and shares love with you on other days, the city of potholes and epileptic power supplies yet the resident defends it with all they’ve got.

4 thoughts on “An Ode to Lagos”